You are in: Home1 / Blog2 / molentargius park 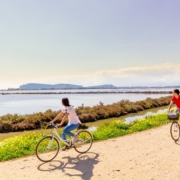 The Molentargius Park is one of our favourite naturalistic locations in Cagliari. Maybe because it is home to our Birkin Apartmentsor because we think it is one of the most beautiful and characteristic natural parks in the city. What matters is that the Park is increasingly rich in elements that make it unique, attracting many types of travellers and explorers, and this can only make us happy.

Among other things, a few days ago five new routes were announced that will allow visitors to get to know the park and its surroundings from new perspectives. The routes, totalling almost 20 km, can be travelled on foot, by bike and on horseback. Another noteworthy aspect that places Cagliari among the best eco-sustainable tourist destinations is the care and attention paid to green mobility.

The five new paths in Molentargius, created by the regional authority in collaboration with Forestas, Cai Cagliari and the Rotary Club Cagliari, are not yet fully defined, but are under construction. There are already signs and arrows to indicate directions and travel times, but they are being implemented and updated throughout the park area.

The trails are suitable for everyone, from the youngest to the most experienced adults: long and short trails to look at the Parco di Molentargius and its nature in a new way.

Many routes, each one more beautiful than the last.

One of the five routes (700), the longest, is the one that allows you to reach the Quartu Sant'Elena area starting from Cagliari, from the La Palma district, and passing by the evaporating tanks, the rollone and the shelter for the forced labourers. 5.9 km that can be covered on foot, by bike or on horseback, in groups or alone, immersed in the nature of the Park with a view of the coloured waters of the former saltworks. The itinerary can also be followed in reverse, as suggested by the website Sardegna Sentieri, from which you can download the detailed map: Sentiero 700 - Quartu La Palma

The second path (701), 4.7 km long, runs along the greater Molentargius Bellarosa pond, starting from the La Palma district and ending in Via della Musica in Quartu Sant'Elena. This is an internal route that crosses the whole of the park's equipped area, as far as the salt pans in the Perda Bianca locality. The road is unpaved and can be followed on foot, by bicycle or on horseback. From this path it is possible to connect to two other paths, the path 701-A and the path 701-B. On the website of Sardegna Sentieri the detailed map: Trail 701 - La Palma Via della Musica

The third path (702), a little shorter than the others, again links the two territories of Quartu Sant'Elena and Cagliari, always starting from the La Palma district. The 3 km route is characterised by the encounter between theindustrial architecture and theavifauna that together make the Parco di Molentargius unique. The path runs along an asphalt road, a dirt road and a cycle track and can be covered on foot or by bicycle. Finally, the arrival at Poetto will certainly repay the effort of the route. On the website of Sardegna Sentieri the detailed map: Trail 702 - La Palma Hippodrome

Footpaths 703 and 704 are the shortest, each taking 15 to 30 minutes. The first remains within the La Palma district, crossing it until it reaches Via dei Tritoni. The second, on the other hand, is about 2 km long and, after crossing Viale Colombo, re-enters the Park, remaining in the municipality of Quartu and reaching the dirt car park in Via Is Arenas - Via Don Giordi.

On the Sardegna Sentieri website you will find maps of all the trails: Sentieri Parco di Molentargius

At the end of the journey and after so much effort, one deserves the right rest. So, if we are talking about Molentargius, the ideal solution for sleeping and resting well are our splendid Birkin Apartments, located next to the entrance to the park.

As well as giving you a location that is more unique than rare, the Birkin Apartments are ideal for those seeking peace, privacy and independence. In fact, the flats are equipped with everything you need to make the most of your holiday, whether short or long, ample space both inside and outside, a private car park inside the property and if you really want to take a trip to the city centre, it will only take you 10 minutes by car.

The perfect solution for families who, in addition to museums, the beach and entertainment, want to get away from the chaos of the city and enjoy the silence and slow pace of nature.

For more information or reservations, visit the Birkin Apartmentspage of the website.

We hope you enjoy our updates and that they help you to get to know and visit the city of Cagliari and its wonders better. Keep reading and following us to keep up to date with news, on the blog and on our social networks. 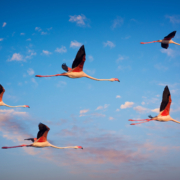 A few kilometres from the city and the Poetto beach, there is the beautiful Natural Park of Molentargius - The salt-pans.

The Park covers an area of about 1600 hectares, and was created in 1999 after careful work to design and enhance the site of international interest, an important resting and nesting place for numerous species of water birds, including pink flamingos, now one of the symbols of the city.

The history of the Park is closely linked to that of the Saline: an important industrial reality in Cagliari, it represented in the local history the most important site for the collection of sea salt.

Today, the Park is characterized by the mirrors of water of the former production system of the Saline, by the other salt pans (Cagliari salt pans) and by the Perda Bianca (former basin for the collection of mother water). From here it is easy to understand why visiting it represents a unique experience for those who choose to stay in Cagliari. A symbol of the city's industrial history, still clearly visible from the structures once dedicated to the extraction and collection of salt, together with the buildings of the early '900, as well as a symbol of protection and preservation of nature.

The undisputed protagonist of the Park is undoubtedly the Pink Flamingo. It is enough to take a walk among the ponds to see hundreds of them, flying or stopping in the shallow water. But not only flamingos, in Molentargius you can also admire species of surface and diving ducks, such as the Mallard, the Gadwall and the Shoveler, the Pochard and the Tufted Duck.

You can visit the Park on foot or by bike. These can be rented at the information point at the entrance to the Park, or if you choose our Birkin Apartmentsapartments, located a few meters from the main entrance, we will offer you the bikes for free.